Year 7 girls and their parents have asked to see pics from our residential week in Loch Eil, #Scotland, in Feb. We hope that you like looking back on the brilliant achievements and experiences! #Resilience. LOADS of pics at https://t.co/w0jR3paQdV https://t.co/9Jnk38n6vA

The charity @TechmumsHQ has created a great series of FREE online mini-modules to help mums develop their tech skills over the summer. You'll find modules on getting started with the internet, email, safety online, social media, and more. Have a look! https://t.co/hopgg9oQpa

A wonderful opportunity for our Year 11, 12 and 13 girls. Apply for a Words for Work internship. You have until 20th July to apply! https://t.co/MPqIN7hsEa

Looking for summer activities? Find out more about this 'Summer of Food and Fun' programme for children and families in #Southwark and #Lambeth. https://t.co/eP6j251HmX https://t.co/tZqQBM0voN

Southwark Libraries have some great events, videos and fun activities for young people as part of their #SummerReadingChallenge2020. Big thanks to our #libraries for everything they are doing for young people in #Southwark. https://t.co/54j1OkjYPX

Is your daughter starting at Harris Dulwich Girls this September? Maya from Year 7 explains what it's like learning at HGAED. Read Maya's thoughts at https://t.co/vDzJwVDCty @Goodrich_School https://t.co/6dFyHcIJly

We are inviting every pupil and parent in Yrs 7-10 &12 into school during the last week of term to review learning and prepare for next term. We'll send you individual appointments shortly. Pls come with your child and contact us to rearrange if you can't make the time allocated.

We look forward to seeing Year 10 and 12 next week. Do walk or cycle if you can. Parents of students in Years 10 and 12 have already been sent letters about the phased reopening, but you can see general information at https://t.co/PeaVrUO9gf https://t.co/sglNdYpjXv

We're really looking forward to seeing Year 10 and Year 12 next week. Please walk or cycle to school if you can. https://t.co/Ri27Y0ifTp

Parent and Student Survey Results - What You Said 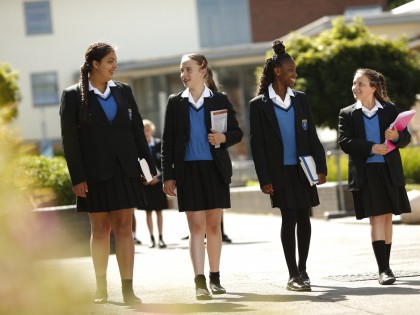 We regularly carry out surveys of parents and students to learn what they think about our academy. We ask parents whether they ‘strongly agree’, ‘agree’, ‘disagree’ or ‘strongly disagree’ with statements such as:

We ask students to rate us on statements such as:

Here are the results of our most recent surveys of students in years 7, 8 and 11 and their parents.

At our parent information evening in December 2016, we did a survey of Year 7 students and parents to find out how they had settled in and what their experiences were. Feedback from parents was very encouraging, with 100% of those surveyed saying that they would recommend the academy to another parent. 100% also agreed that their child is well taught and well looked after, and that any bullying is dealt with effectively. Of the students that responded, 100% say that they are happy, learn a lot and feel safe at the academy. A few students felt that they wanted behaviour to be better still and as such, we have spoken further to those children to hear their views. Where appropriate, we have acted to address any issues raised. Download the full results (pdf).

We undertook our regular survey at the Year 8 parent evening in January. The results from parents portray an overwhelmingly positive picture. 100% of those surveyed say that their child is happy, feels safe, is well taught and is making good progress. The student survey results also show very positive perceptions of the Academy.  100% of students that responded say they learn a lot in lessons, that they receive good teaching, feel like they are being well-prepared for the future and that there are many extra-curricular opportunities that they can get involved with. Download the full results (pdf).

At our Year 11 parent evening in December 2016, we surveyed both parents and students about their experiences at the academy. The great majority of responses from parents were very positive, with 95% of those surveyed saying that their child is happy and making good progress at the academy. Student survey results are similarly positive with 100% of students that responded saying that they feel safe at the academy and believe they learn a lot in lessons. As with parents, any pupils who disagreed/strongly disagreed with any of the statements on the survey were spoken with directly so the academy could obtain more detailed feedback from them and act on this feedback. Two such areas are student voice and healthy lifestyles, and these will be a particular focus in coming months. Download the full results (pdf).