In anticipation of COP26 in November 2021, the Harris Federation ran a virtual Climate Change Conference recently, focusing on to what extent countries are meeting, or not meeting, their climate change targets. 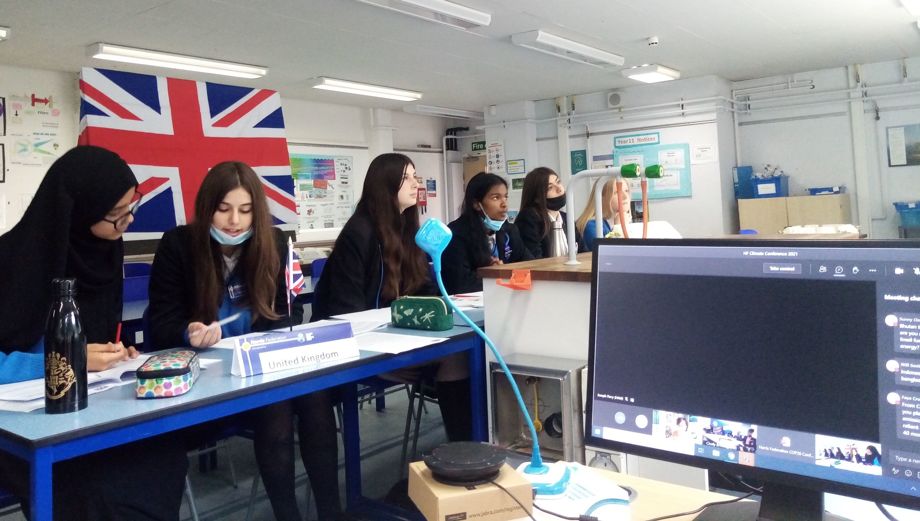 The event was aimed at Year 9 Geography students who have completed our 'Earth's Biggest Challenges' topic which focuses on anthropogenic drivers of climate change as well as exploring the impacts of this change on different countries around the world.

HGAED students spent five weeks prior to the event attending one-hour preparation sessions after school to research the UK's position on, for example:

Using their research, students presented the UK's views on whether sufficient progress is being made on emission targets, if the UK is willing to do more, and if we can cooperate with other countries on cities, energy, forests and food and oceans to help raise global ambitions.

Students also gave the UK’s opening ‘position speech’ and were able to debate with other countries (represented by other schools) to determine whether sufficient progress is being made and if more can be done.

HGAED students debated with China, questioning them on their use of coal-based energy. They also debated with Saudi Arabia on their economic reliance on the oil industry as well as with Bangladesh and the Marshall Islands who felt the UK needed to do more to support vulnerable nations.

Students were also given the opportunity to find out what the Harris Federation is doing to support efforts to combat climate change.  As a result of the Climate Change Conference, students are now working on their own ideas about how to bring more awareness of climate change into school.

“I felt empowered to take action at school,” said Shri. After the event Nowa commented: “I feel much more informed and aware about climate change and want to make a difference in my home - we will be using less plastic and recycling more.”

In 1994, the countries of the UN signed the first international treaty on climate change.  All countries agreed that action and annual talks called the Conference of the Parties (COPs) were essential.

At the COP meeting in 2015, world leaders signed the historic Paris Agreement to cut greenhouse gas emissions and keep global warming well below 2 degrees Celsius.  But emissions are still rising.

The world's leading scientists warned in their Special Report on Global Warming of 1.5 degrees Celsius that the effects of 1 degree Celsius are already here. Even as the Paris Agreement was signed it was understood that when added together, country targets to cut emissions by 2030 would not be enough to limit global temperatures to 2 degrees Celsius let alone the aspirational increase of 1.5.  Five years on and time is running out.

COP26, to be held in Glasgow, has already been delayed for a year by the pandemic.  This meeting will be pivotal in gathering the world to take strong action for the future.