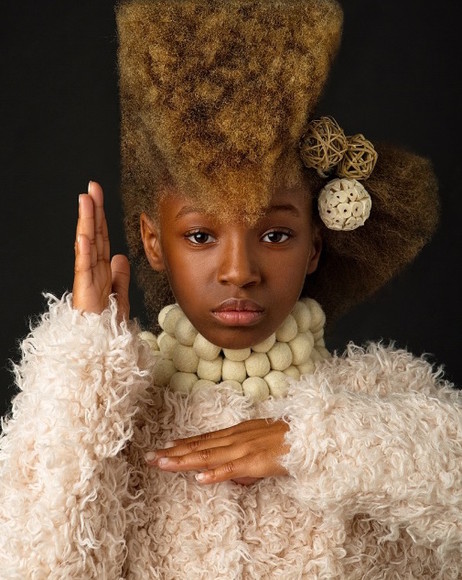 When teacher Sarah Thompson saw some striking images of young African-Americans on Facebook last November she couldn’t have anticipated the impact they would have on students at Harris Girls’ Academy East Dulwich.

Sarah, who manages our Health Hut – a project encouraging girls to focus on health and wellbeing – wanted to use the pictures to prompt discussion about cultural identity, hair and skin.

“So many Black and mixed race girls use powerful chemicals to straighten their hair from an early age,” says Sarah, who is herself mixed race and remembers students being bullied for their hair and skin colour when she was at school.

“I wanted girls to see that they have a choice and that their own natural appearance is beautiful,” she said. 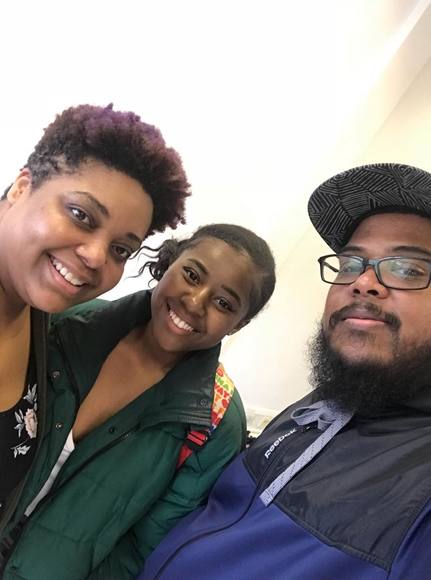 Sarah wrote to Atlanta-based photographers Kahren and Regis Bethencourt (pictured here with one of our students - see full story below) who run a company called Creative Soul. She asked if she could print off the pictures and display them at the school.

The photographers quickly replied that they would be delighted. Even better, they would send the school a free set of large prints for Sarah to use.

When the prints arrived Sarah decided to hold a competition on the theme of ‘Identity’. She invited our girls to write about how the images made them feel. Lots of students took up the challenge. When Leah, for example, saw the image featured above she wrote: “ I wanted everyone to look at this, and to be able to encourage them to let their inner personality shine.”

To show Kahren and Regis the impact of their pictures on our students, Sarah filmed Leah’s response and sent it to America.

In fact, the Afro Art pictures were now going viral. They were being liked and shared on the internet thousands of times. CBS News covered the story, using Leah's film to show their international impact. Watch Leah on CBS news!

Then Kahren and Regis wrote to Sarah telling her they were coming to England in May and could they visit? They had been so impressed with the competition that Sarah had organised and wanted to meet our girls in person.

So last week the photographers spent the day at the school judging the competition winners and meeting students to talk about the pictures and why they took them. 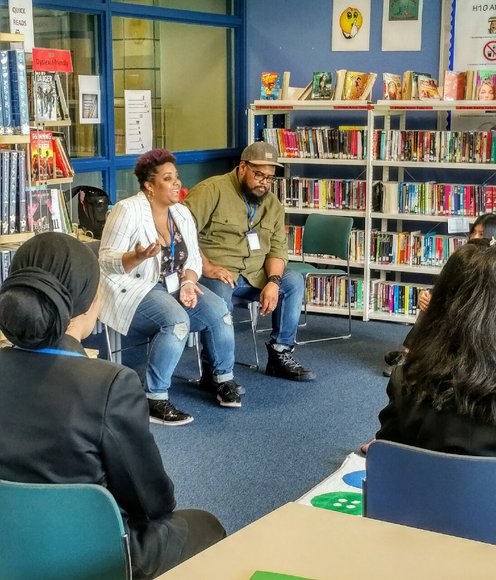 "We were amazed and inspired by the overwhelming response to our photos by the students at Harris Girls’ Academy,” said Kahran. “It is one of our greatest accomplishments to know that our work has made a positive impact on so many young girls in the UK and the world.”

The photographers were ‘blown away’ by our students’ art and fascinated to learn about our Black Victorians project and our work with artist-in-residence Alix Bizet on a project about hair and cultural identity. They read every single competition entry and spent time with our photography students too. 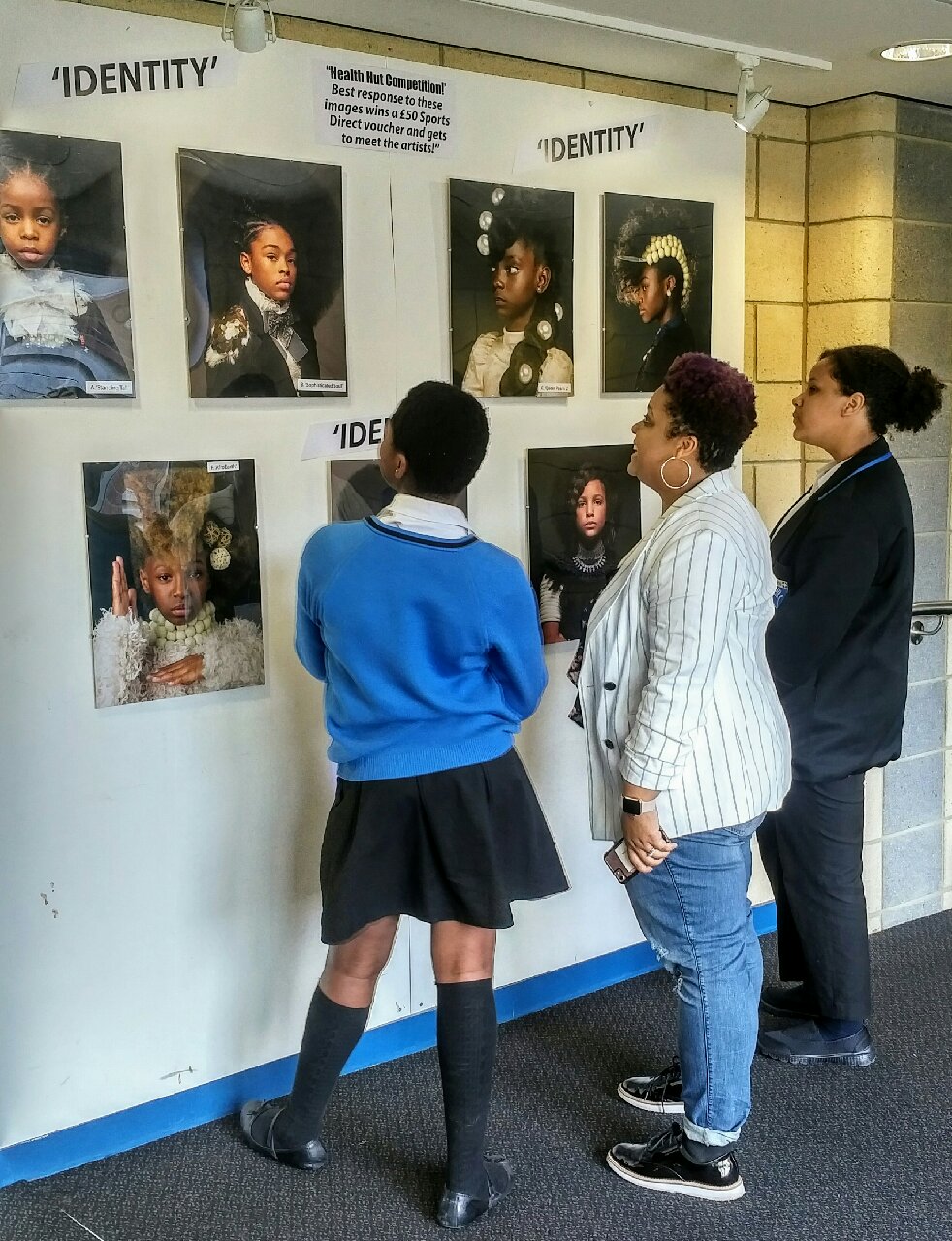 Sadly, one of the competition winners, Ria, was not in school that day to meet the photographers. She was really disappointed so Sarah asked Kahren if there was any way Ria could meet them while they were in the UK. “Kahren said they were working on a photoshoot that weekend and would Ria like to come and help out?” said Sarah. "So last weekend Ria assisted at the photoshoot in London and had an amazing experience."

“The faculty, staff and students were so welcoming and made our visit an experience that we will never forget,” said Regis. “We will continue using the feedback from the students as motivation to continue our work inspiring girls around the world to see their unique differences as assets rather than obstacles.” 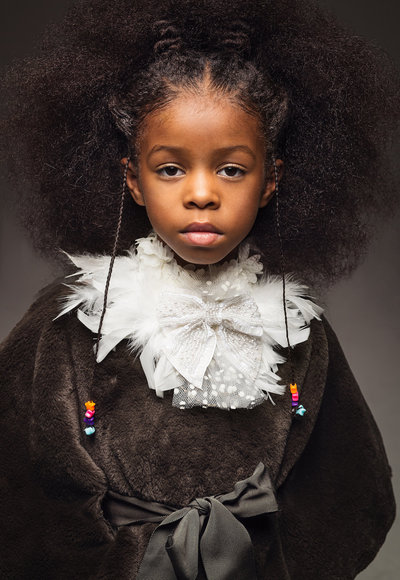 Inspired by this image, competition winner, Ria, wrote about how she used to continuously straighen her hair in order to "manipulate and change the texture of my hair and also to avoid comments such as 'why is your hair like that'."

"And on a personal level, these images have had a very powerful effect on my perception of beauty and if I had seen more images like this [when I was younger] it would defintiely have had a positive effect on my self esteem."

The visit was covered by Southwark News too. 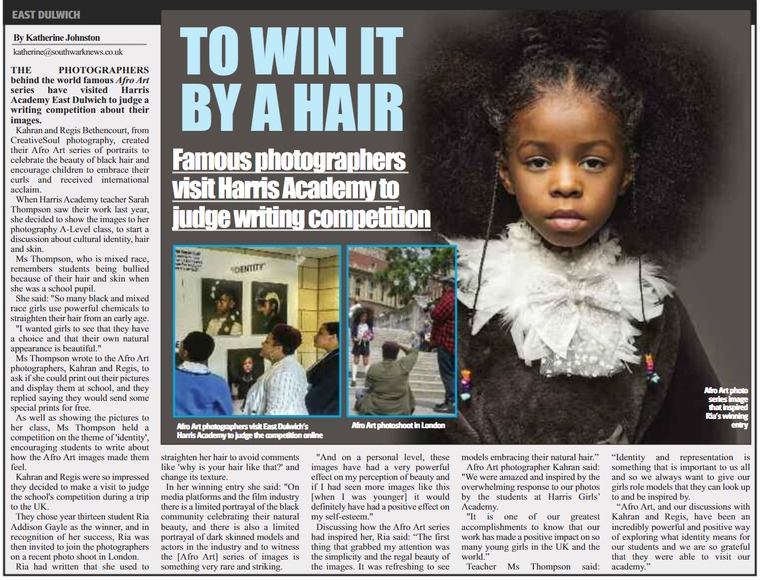