Download the May 2022 parent update for all the latest news from the academy. Download your copy at https://t.co/M4ytllLrzt https://t.co/nuJ5XJcZjy

“Doing yoga is good because sometimes I need to wind down. It helps me mentally and physically." Year 8 student. Find out more about our after-school yoga with @projectyogi. Read more https://t.co/ZSCieHfjPe https://t.co/F4ODFHe8BN

Year 10 have been discovering what studying at Cambridge and Oxford is really like. Our @HFexperience students visited @FitzwilliamColl Cambridge, while others had a ‘virtual’ visit to @StAnnesCollege Oxford. Read more https://t.co/tawABnPgQQ https://t.co/wggxJspBXP

Our Year 9 King’s Scholars take part in a ‘Your Career Path’ workshop. This looked at GCSE options, post 16 options, and pathways beyond post 16 to university and careers. Thanks to @KingsCollegeLon for the great session. More at https://t.co/Tibak0QhXV https://t.co/VW1ftmFUVd

Years 7-11, please check out the schedule for your return to school on the website. Looking forward to seeing many of you tomorrow for testing and to seeing you all back at school. Happy New Year!

Download the first of our new parent updates at https://t.co/dFMaMzz5LQ. Keep in touch with the opportunities available to your children at Harris Dulwich Girls. #CharacterCourageConscience https://t.co/AM5kZhTK0l

Debate Team Gets Off To Flying Start

Our after-school club Debate Mate has got off to a flying start this academic year with a large cohort of students getting involved across Key Stages 3 and 4.

Debate Mate is an after-school club that aims to empower our students through teaching skills related to debating. We have two inspirational university students who act as our peer mentors in the club, leading the sessions and providing advice.

Our current members have big boots to fill as our previous cohort managed to win The Urban Debate League, as they were the highest scoring secondary school team across the nation. 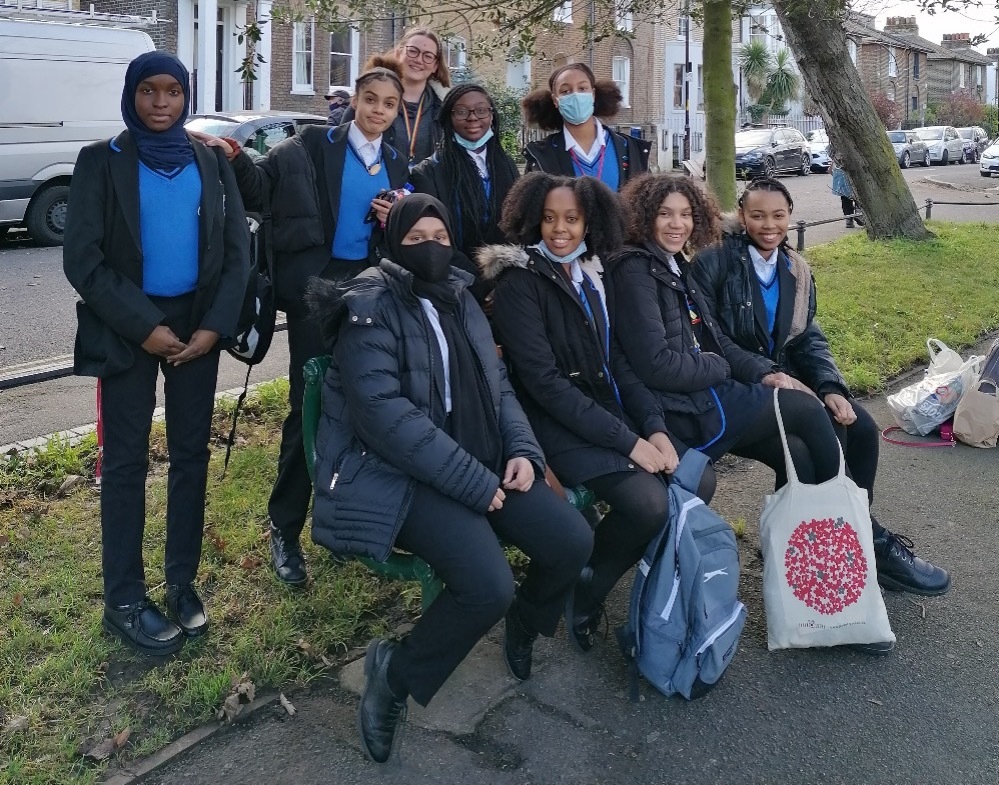 Through the sessions, students work on the rules and format of debates and participate in competitions against other schools. These sessions and competitions encourage students to work on skills such as teamwork and public speaking but also encourages them to further develop personal skills such as confidence and resilience.

So far, students in the club have participated in two competitions (with another one close on the horizon after the Easter Holidays!). Year 9 students (pictured above) participated in an inter-school competition against other local Harris students debating motions such as “This House believes that the government must agree to ban all use of fossil fuels, rather than working towards a target of net-zero carbon emissions.” Despite the very challenging topics the students really rose to the occasion and placed a well-deserved third across the whole competition. A big thank you to Ms Gulle who assisted with this trip.

The second competition students participated in was The Urban Debate League. This took place over two separate rounds. The first round was done virtually, with some students debating in a competition setting for the very first time! Despite the relative inexperience of our teams, the students were very strong and ended up winning all four of their debates.

The second round of The Urban Debate League took place in person and we travelled to Sydenham Girls school in Forest Hill to compete against other local schools. Motions were again challenging with topics such as “This house believes that developing countries should ban companies with negative environmental practices from operating within them” and “This house believes that private news corporations should be banned”. Once again, the students were very impressive with how they responded to the challenge which resulted in them winning 3 out of 4 of their debates.

Students are pictured below preparing for a debate against Sydenham School. 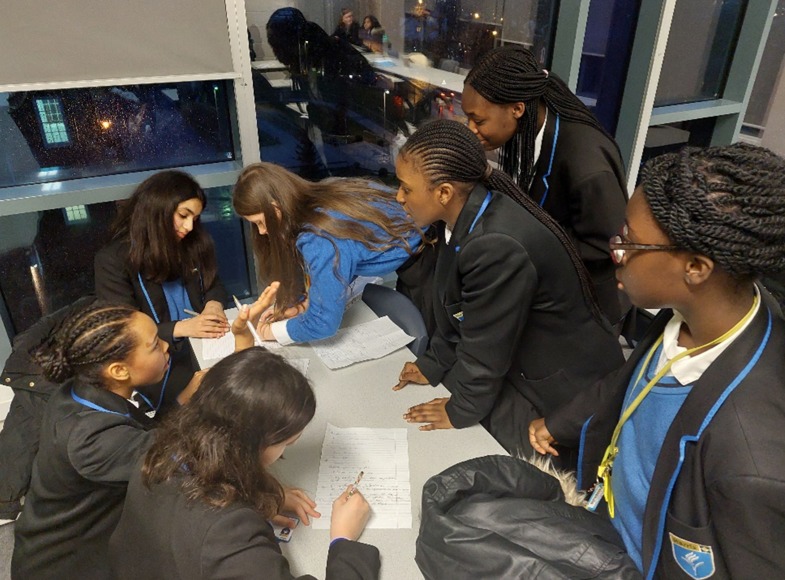 The team is supported by Ms Halnan and Ms Morris from the English department and Ms Boateng and Ms Murray-Tinsley from the History department. All of us have been so impressed by the inspiring attitude the girls take when grappling with some very tricky concepts.

What has been most inspiring though is the supportive environment they have created within the club – it is a real privilege to be able to watch the students give one another feedback, support and create such a welcoming and friendly atmosphere within the club.

So a big thank you to all of the students involved for making it the success it has become and we encourage anyone who is interested in the club to come along – it is never too late to join!

Seconds after HGAED students discovered they had won their final debate at Sydenham School! 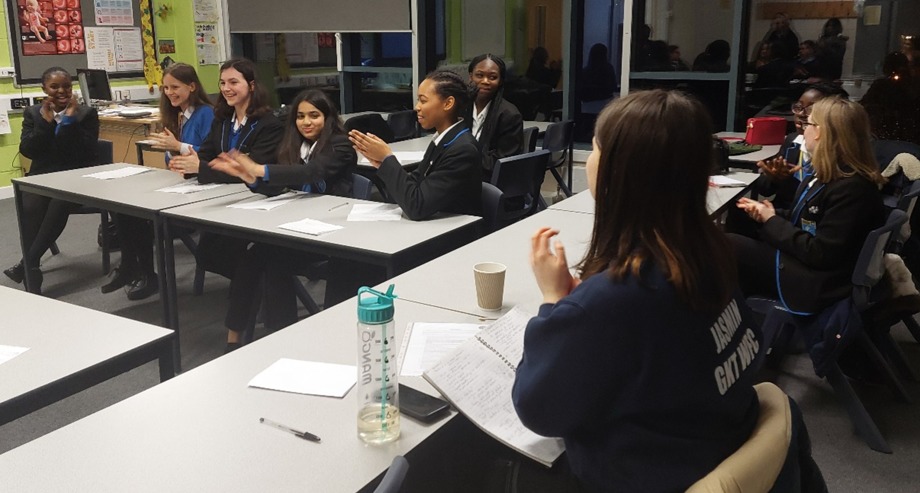 On the steps of Sydenham school after the competition. 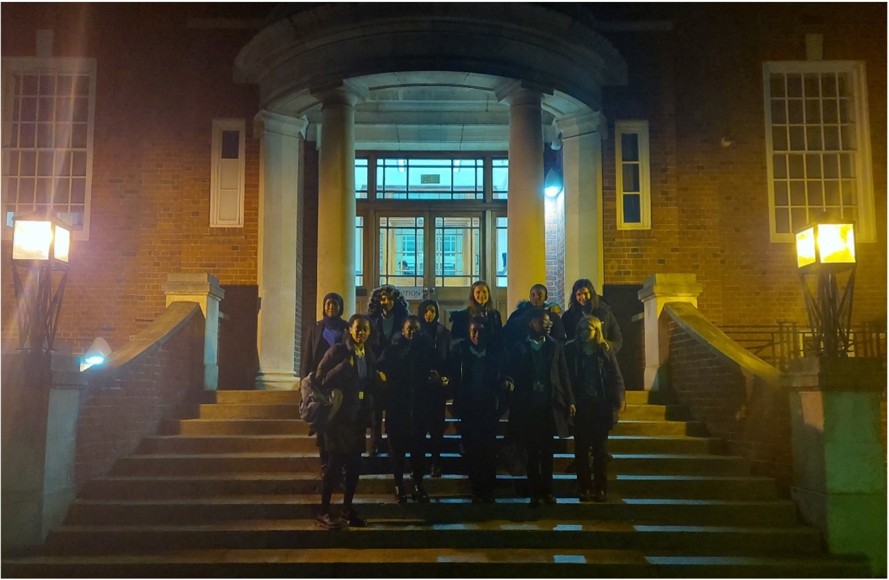