The quad is looking glorious in the spring sunshine. https://t.co/9TGj0uDkZw

#Photography student, Iris, has taken these pictures to show how she's exploring the formal elements of photography including line, shape, focus, space, texture and tone while she's studying at home. Impressive work! https://t.co/rh3n3oKg1A

Waseemah in Year 8 has sent us this really accomplished 'negative space' drawing she's created for #art - by filling in the space around the objects to reveal their forms. Very accomplished, Waseemah. Great work! https://t.co/tzohg4Kr0g

It’s #MentalHealthAwarenessWeek and the theme is #kindness Today, let’s think about who and what we’re grateful for and say thank you. Who will you thank today and why?

Zuzanna, Year 8, has been researching #LeonardoDaVinci as part of her #art studies while at home, including creating this beautiful work, which we wanted to share with you. https://t.co/hlt3TMDNe1

We’re so proud of this edition. Our first lockdown edition and absolutely inspiring. Well done girls!

Our latest student zine #VoicesFromTheRye is out now, on the theme of 'Pathways'. "The zine is about the things that matter to us as young women,” says Awa, Year 10. Read now at https://t.co/XuuLQNOLob https://t.co/l7aYeUIvzG

Our girls are creating some truly inspirational #art while they are at home. Here's a #collage by Alissia, Year 7, inspired by German #Dada artist Hannah Höch. Amazing work, Alissia! https://t.co/Sg6NPpZPYU

Don’t forget to prioritise your mental health and always seek support if you need it. It’s mental health awareness week next week: let’s look after one another https://t.co/TfExIGsJJ9

Self care first-look after yourselves. https://t.co/mnuQ3xhUdb

We’ve not tweeted in a while...so thought it worth saying we’re missing you all!! Keep in touch please-your coaches and teachers are still checking in! Let us know how we can help 😊

A special event at the South London Gallery in June marked the end of a year-long art project, Hairytage, in which students have been collaborating on a project inspired by artist Alix Bizet to explore the significance of hair in Afro-Caribbean communities in Peckham.

Alix started by asking students and teachers to collect combings from their own hair, which she spun into a yarn (pictured below) to represent the diversity of the school. 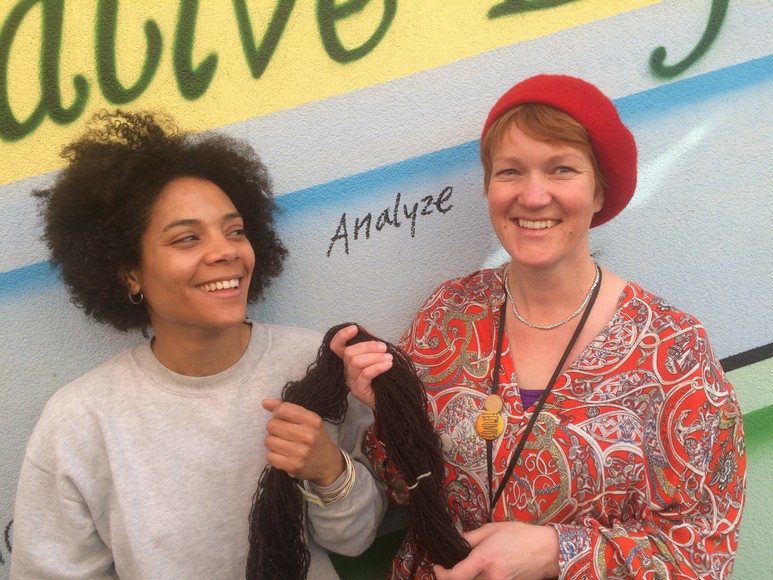 Alix Bizet (left) and Clare Stanhope, Head of Art, with yarn spun from hair collected by students and teachers.

Students also photographed and filmed hairdressers in Peckham to explore the significance of hair in Afro culture, while an embroidery workshop looked at how the hair can be used to create new objects.

“The Hairytage project is all about using creative art practices to open up conversations,” says Clare Stanhope, Head of Art. “In this case it’s about issues of identity and also community issues such as gentrification that are driving change in Peckham.” 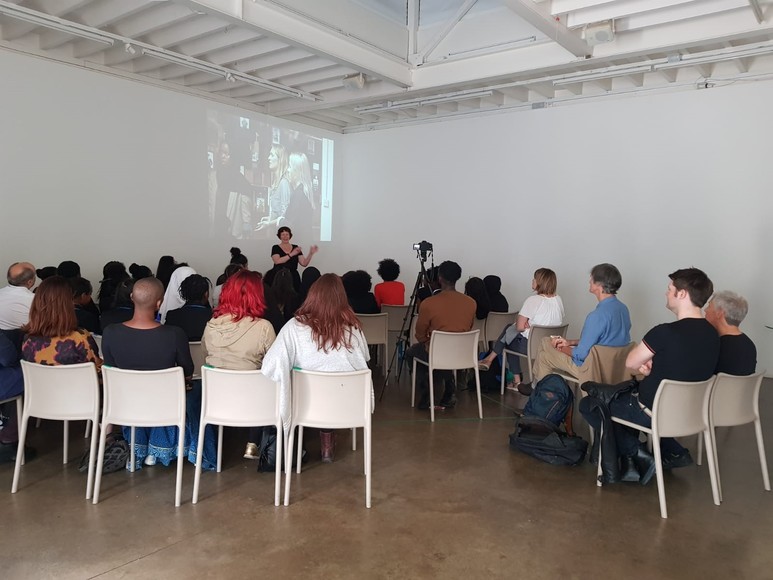 At the South London Gallery event, Alix Bizet, who is the school’s artist in residence this year, said: “Hair is a material that I work with as a social designer which allows me to look at different aspects of society but which also allows me to tackle some serious and difficult socio-political issues, such as beauty standards, racism, discrimination and gender equality.”

As part of the project, students had workshops with a range of people including artists, academics and poets – led by Year 13 students. They also met local residents to discuss their memories of Peckham and how they feel about how things are changing, and worked with other students across the school, such as Geography and English students, to see how their interests overlapped with the project. 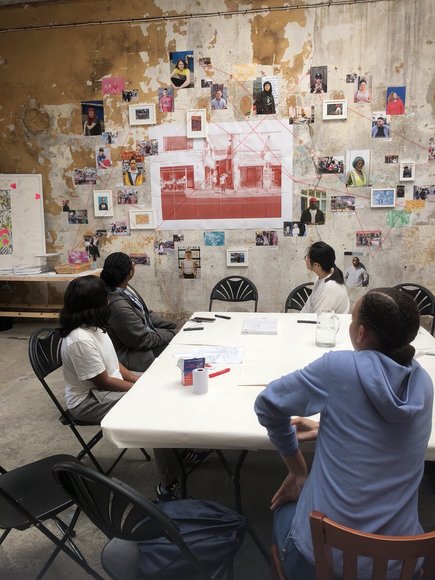 The project included student-led workshops with a range of people including artists, academics and poets.

Students then used yarn made from their hair to create an embroidered garment to capture what they had learned and explored and turn it into a living archive that people can wear, see, touch and retell the memories of people from Peckham as well as add future stories.

At the South London Gallery event, students created a dramatic performance depicting the hair salons of Peckham, and attaching images and quotes from throughout the workshops on to a hair-embroidered gown.

Speaking at the event, student Ria said: "When people come together to share their thoughts from across classes, across genders, across cultures and across age ranges, people become empowered. We learn that it is important to listen to each other, to collaborate. By sharing spaces, we learn that there is more that connects us than divides us. And that is the essence of community. That is the essence of the Hairytage project.” 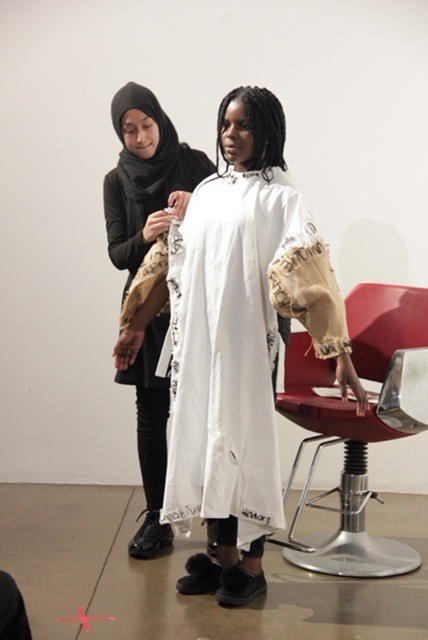 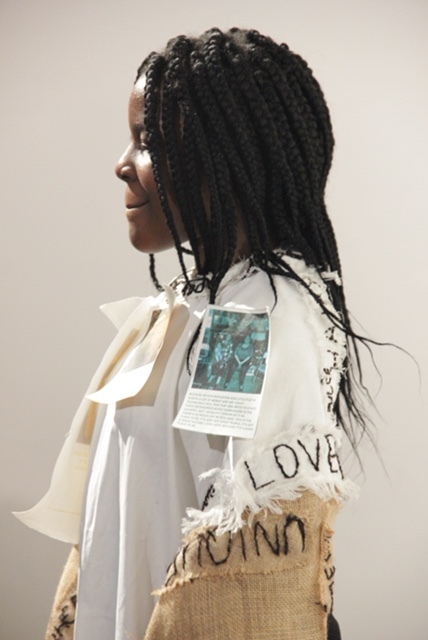 The gown (pictured above) will now become a living archive that can be displayed or worn as a record of the Hairytage project.

“This has been such an exciting project that has taken off in directions none of us could have predicted,” said Ms Stanhope. “One of the aims of projects like this is to show that we can’t always control outcomes or know in advance where things will take us. Hair itself becomes a metaphor of something that grows, but can be taken or dislocated and moved elsewhere to create something new and unexpected.” 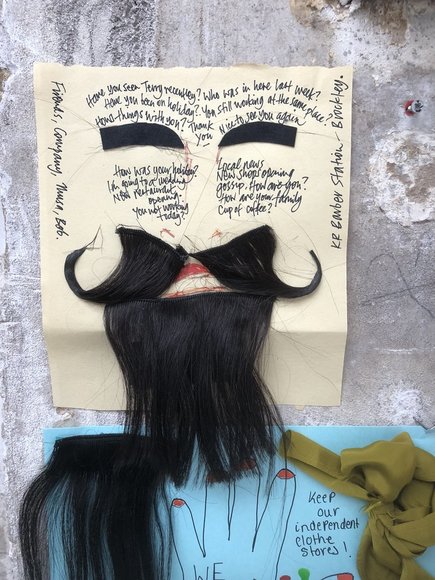 This was the first major project to be developed through the Centre for Creative Explorations, which is based at HGAED. This was also the first time the centre had received outside funding to support the project, from Southwark Council.

A timeline of the Hairytage project